Take a minute to look at the wonderful things we have been doing!

We placed Captain Scott’s race to the South Pole on a timeline which includes events in our lifetime and events throughout history. We talked about placing the events in time order and discussed the word ‘chronology’. Then we found out more about Captain Robert Falcon Scott and his fateful jounrney to the pole.

we used google Earth and atlases to locate The North Pole and the Arctic and the South Pole and the Antarctic. We found out these places are very cold. We then found the equator and learned that the countries located around the equator are very hot. We also found out that mountainous areas can be cold too because the higher up you go, the colder it gets. We then discussed what mountains might look like on a geographical key and that we need keys to help us understand the symbols on maps.

This term we have been learning about money. We have learned about the value of the different coins, added amounts of money and even visited Mrs Davis' and Mrs Bayes shop to buy some goods and work out our change.

This half term we are learning all about Islam. Today, we were lucky enough to welcome two visitors to our year group who are practicing Muslims. Azlan who is in Year 5 and his mum came in to tell us all about Islamic prayer (Salah) which is the second pillar of Islam and answered lots of our questions about Islam! They even told us all about Ramadan! We had a wonderful time, looked at special prayer mats and special scarves that ladies wear during prayer. They also wear scarves as a sign of respect when they read the Qur'an. The children and the adults learnt a lot! 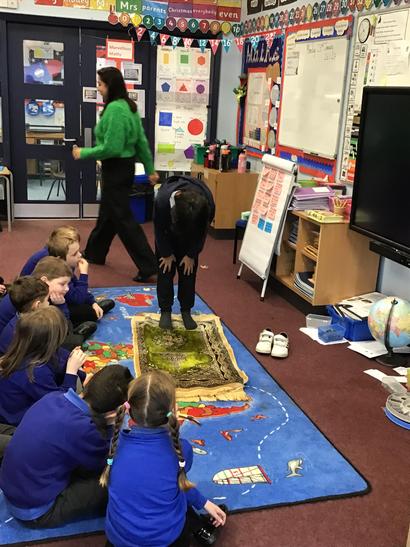 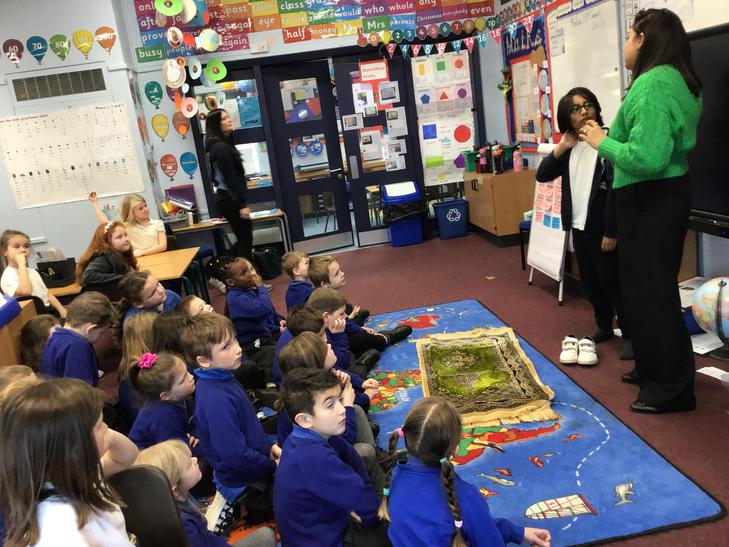 Today, we learned all about Christian prayer. India’s mum came to school to show us how Christians pray and talked about why prayer is important to her. We had the chance to ask some questions about Christian prayer, how she prays and how it makes her feel. She showed us her cross that reminds her God is with her. We also said the Lord’s prayer together. She explained that these were the words Jesus gave to help people when they didn’t know what to say to God. The experience helped us to understand the Christian faith more deeply and helped us to put our vision in to practice; understanding that everyone is unique and should be treated with respect and dignity.

We then compared the two faiths and thought about how prayer is similar and idfferent for Muslims and Christians.

Fly Me to the Moon

Today Neil Armstrong visited us in class via zoom. We learnt all about his early life and how his love of flying developed when he earned his Eagle Scout Badge in the Boy Scouts. He then went to university where he learnt to fix and build planes before becoming a pilot in the air force. He then went on to work for NASA and became the first man to walk on the moon. We acted out what it was like to launch into space in a rocket and to walk around on the moon. He told us about his time on the moon and how he hit a golf ball which flew off into deepest darkest space. We had the chance to ask him some of our own questions and learned how he ate his meals, went to the toilet and kept warm in space! He told us the BEST thing about going to the moon was the fact that he was the first person to ever walk upon it!

In history we have been learning about significant people our parents and grandparents might remember. We learned all about Neil Armstrong and now we know he was significant because he was the first man to ever step foot on the moon in July 1969 and said the famous words 'One small step for man, one giant leap for man-kind.' We also found out about Tim Peake who visited the International Space Station in 2015 and that their experiences in space might have been different. We now know that space travel and exploration is important because it impacts how we live today. forexample, we would not have things like mobile phones, trainers, wireless headphones, cordless hoovers, solar panels and so much more if it wasn't for space travel.

To end our brilliant topic all about the Great Fire of London, we had a wonderful day celebrating what we had learned. The Evesham Fire Department paid us a visit and demonstrated how they use their equipment to combat fires in our local area. They inspired many of our children to want to become fire fighters one day! We baked bread to remember Thomas Farriner and how the fire began and made fire crowns in art to remember the fierce blaze that changed the face of London forever.

We placed the Great Fire of London on a time line and learned that it took place in September 1666 after a long, hot summer. We learned more about the events of the fire and sequenced them in chronological order.

In Geography we have been learning about the United Kingdom. We've found out about the countries that make the UK, their capital cities and the seas that surround the UK. We investigated some of the UK's physical and human features and added these to our map.